The Sew-Able doll line has been around for a good decade now, but somehow reviews are still thin on the ground - I've seen maybe one or two, but that's been it.  And that's also what made me hold off on ordering one of these dolls for a solid 7 years.  So I thought I'd share a more detailed overview of this doll than I usually do, just in case someone is like me and waiting to hear more about these toys.

Sew-Dolling's dolls are 18" play dolls similar in size to the American Girl line (the company also sells outfits that fit dolls of this size).  The Sew-Able dolls come with two options: bald, or with prosthetic legs (one above-knee, one below knee), and Madison (the doll that I have) is one of the latter.

There are boy and girl versions of the doll, with three hair/eye choices for the girls and one of the boy (the bald dolls obviously only have eye choices).  There is only one skin tone available, a pale colour similar to AG's light skin (there will be additional AG comparisons further along).

The doll's packaging is solid: cardboard with a plastic front panel.  The doll and her accessories were firmly attached to the inner layer (which has a cartoon-y hospital design) but simple enough to remove (not as simple as an AG, but less complicated than most store brand dolls).

The included accessories include an outfit (this particular one included a dress, turtleneck top, socks and boots), crutches, a backpack and a teddy bear.

The clothes are a little cheap-ish (you can see that the button on the left overall has come off), but the boots are of a decent quality.  The teddy is cute, well-stuffed and is actually jointed, which I thought was lovely.  And the crutches are fantastic - realistically designed, and solid quality material.  They could easily be used as an accessory with more detailed dolls and not suffer by comparison.

There are two other default outfits available for the girls - a hospital gown, and a khaki pants set - and a khaki shorts set for the boy doll.  The teddy and crutches come with all versions of the doll, while the backpack (functional, although the material is a bit thin) is replaced with a suitcase for the hospital gown version.

The prosthetics are made of the same material as the dolls regular limbs and are held on with a belting system (which strikes me as a little old school, but does make the doll more versatile if you're looking to make a historical character out of her).  I was surprised to see that she also came with stump socks, and thought that that was a nice additional feature.  Amusingly, the feet are blushed in the same "realistic" style as the hands, which strikes me as a bit of an odd choice.


This doll's body construction is very similar to an American Girl doll, with a plush body and plastic limbs.  I'm less that thrilled by the seam placement running right down the middle of her chest (on AGs the seam runs down the back), but she's well-stuffed and her limbs are well-attached, so she is a well-constructed doll (although it's hard to get her to sit upright without her prostheses on).

Her head is tied on with a thick zip-tie, rather than the strings that some similar dolls have in order to allow for easier head removal/cleaning/restuffing.  On that note, I have noticed that some of her body stuffing has started to pop out around the neckline.

The braids struck me as a little messy, so I took them out and was fairly pleased with what I found. The doll has hair of a good thickness and looks like it would hold up to hair-play.  It's a little dryer than some doll hair, but not to an extent that worries me about breakage.


The photo on the right also shows one of Sew-Dolling's general outfits.  The dress isn't the best material, but it's cute (and better constructed than the default dress).  The necklace and bracelet are a cute touch, but a little tighter than I think they should be (and again, not great material).  The outfit also came with a clutch purse and a pair of black dress shoes.  For the price point (lower than AG outfits, slightly higher than Springfield), I thought the outfit set was a solid value.

One of the main questions I hear about these dolls is how they compare to American Girl, and my general answer is that they're quite similar in terms of construction and size but a bit different stylistically.  The most noticeable difference is the face - the Sew-Able dolls have a face sculpt that's reminiscent of a porcelain doll more-so than a play doll in that they have pursed lips and a heavily blushed face.  Some of that difference could be minimized by customizing the face paint, but these dolls will always clearly look a little different.  I will say, for the people who are turned off by the face, that I've found the doll to be quite a bit cuter in person than I expected from the sales photos.

Since taking my original box opening photos, I've kept this doll on display primarily in American Girl brand clothes, which I would take to be a good indicator of compatibility.  And this week I had the opportunity to compare her to my sister's childhood AG dolls, so I've taken some comparison shots for anyone who is interested (with the caveat that these are AGs from the early '90s, and are thus a bit wider and a slightly different style than the current ones).

In this photo, the Sew-Able doll appears to have a significantly larger head, and while it is slightly more round, most of that extra width is static in her hair (I'd just taken off the knit cap that she's wearing above).

In low light the two appear to have similarly coloured heads and bodies, but in full light the Sew-Able doll is slightly darker skinned, with more of a red-brown tone, as opposed to the American Girl doll's yellow tone. 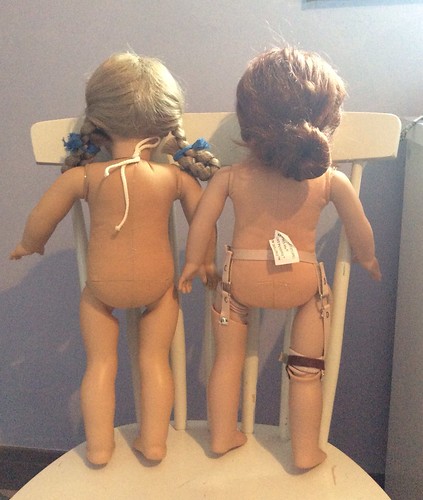 From behind, the most obvious difference (aside from the prosthetics, of course) is that the Sew-Able doll has a large tag sticking out of her back seam.

Overall, I'd say that Sew-Dolling has done a fantastic job with these dolls, in that they're well-made and compatible with popular dolls of this same size.

It's a shame they couldn't offer more skin colour options (as the Extra Special Dolls manage to do), and the faces aren't going to be to everyone's taste, but I think they're a wonderful addition to any doll posse, whether your dolls are for play or display.