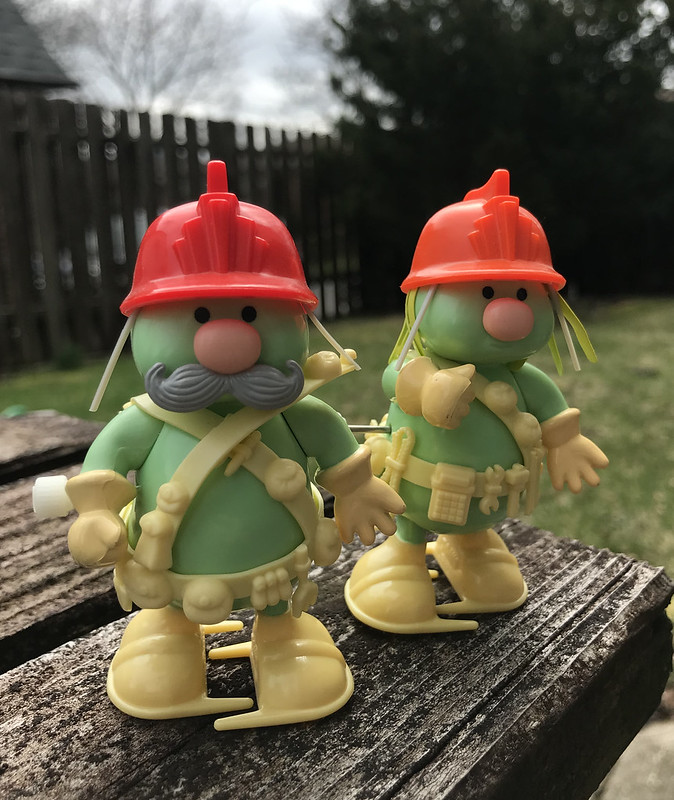 I noticed the existence of Fraggle Rock Funko Pop figures while watching one of YouTuber Lawn Gnome's Funko review videos.  My first thought was that I should try and pick one (or two, or more) up. But then I remembered that as children, my sister and I had several of the plush Fraggles and the plastic Doozers that were released in the early '80s during the tv series' original run. And because of that I realized that there were probably old Fraggle toys still living in my mother's basement.  And indeed I found some!

In 1983 Tomy released a series of four wind-up Doozer figures, of which I had two.  Each one had slight variations in their hair and features (and helmet colours), and each came with a removable tool belt. Apparently most of the figures that show up on the second hand market are missing those belts. Luckily enough both seem to be complete with their accessories and in complete working condition.  So let's take a closer look!

And since these are wind-up figures, one of my first questions was whether or not they would still work. And the answer is yes!

.
I had great fun bringing these two out of storage and into the sunlight, so I hope you enjoyed seeing them as much as I did. Have you considered picking up re-releases of any toys that you owned in childhood?
Posted by jSarie at 10:26 AM